Fastershire is a partnership between Herefordshire Council and Gloucestershire County Council to bring faster broadband to the two counties, with funding from central government’s Broadband Delivery UK matched by the local authorities. The ultimate aim is that by the end of 2022 there will be access to fast broadband for all who need it.

However, Fastershire is not only about technology, the project also includes social and digital inclusion activities, and an extensive business support programme, FasterBusiness. The programme is designed to help small and medium size businesses get the most from fibre broadband and be more competitive. In fact, it is expected that Fastershire will help to boost the local economy by £420m over the next ten years.

Fastershire will revolutionise the way that people of all ages across Herefordshire and Gloucestershire work, learn and play, and will benefit generations to come.

Phase 2 of the Fastershire rollout of faster broadband across Herefordshire and Gloucestershire will be based around four areas (area 1, 2, 3(A-E) & 4) and will comprise of premises that were not covered by Phase 1 or commercial rollout.

Each went through its own consultation and procurement process to secure a supplier to carry out the deployment. 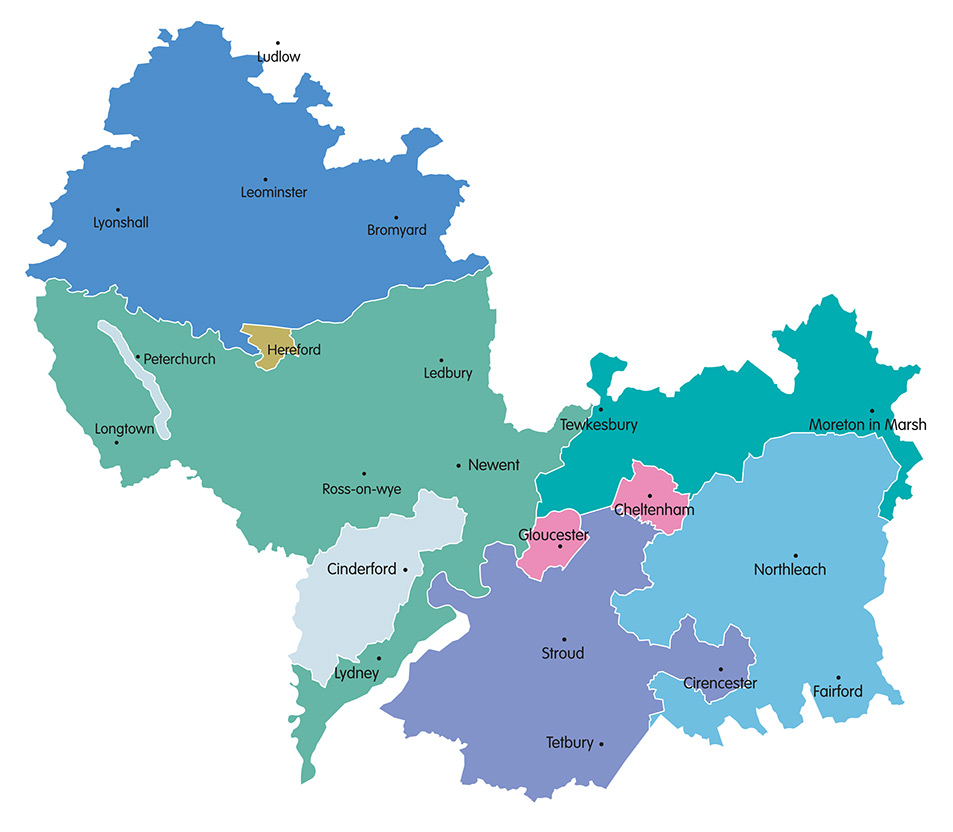 All information, including forecast dates, is indicative only. Forecast dates may move forwards as well as backwards.

Gigaclear was awarded the contract to deliver phase 2 in the Cotswolds in summer 2015. The first digging for our delivery of ultrafast Fibre-to-the-Premises to parts of the Cotswolds began in October 2015 and is now complete.

We have awarded a contract to Gigaclear to deliver the phase 2 rollout in parts of the Forest of Dean in Gloucestershire and the Golden Valley in Herefordshire not upgraded to faster broadband in Phase 1.

Area 3(A-E) & 4: The rest of the Gloucestershire and Herefordshire

Area 3A-B (Cheltenham and Gloucester) and area 3B (Hereford)
We have awarded a contract to BT Group to deliver the phase two rollout in these areas not upgraded to faster broadband.

Area 3(C-E) & 4: The rest of the Gloucestershire and Herefordshire
We have awarded a contract to Gigaclear to deliver the phase two rollout in these areas not upgraded to faster broadband in Phase 1.
To find out if your property is included in this next phase of rollout please use our address checker at the top of the page.

Phase 1 of the Fastershire strategy has provided approximately 90% of the homes and businesses across Herefordshire and Gloucestershire with access to superfast broadband and speeds of 30Mbps or above.

Over the next two years, phase 2 of the project’s strategy will increase total superfast coverage to around 98%, as phase 2 seeks to provide faster broadband to premises that were not covered by Phase 1 or commercial rollout.

Stage 3 of the Fastershire rollout sees BT continuing to deliver in Hereford, Gloucestershire and Cheltenham and build on their commercial deployment.

Gigaclear has been awarded the Fastershire delivery contract for rural areas of the county.

Gigaclear is a wholesale network provider and internet service provider (ISP) who specialise in connecting rural communities by installing its pure fibre network straight into the property.

Pure fibre, also known as Fibre to the Premise (FTTP) offers a more future-proof solution and broadband speeds of up to 1000Mbps. This technology is not affected by how far your home is from the network cabinet and the connection is symmetric so you get the same upload and download speeds.

For the remaining, hardest to reach properties, Fastershire is using a mix of solutions, including a bespoke grants and contract extensions.

Fastershire, in partnership with Connecting Shropshire and Superfast Telford and part funded by the European Regional Development Fund, have designed the Marches and Gloucestershire Broadband Grant.

The grant provides up to 100% of the capital installation cost for an eligible SME that not be included in Fastershire’s main rollout and that can demonstrate the economic return.

Fastershire has been awarded funding from the European Agricultural Fund for Rural Development (EAFRD) and has identified a number of significant property clusters that could benefit from this funding.

For the remaining properties, Fastershire will be exploring possible contract extensions with BT and Gigaclear to provide access to faster broadband.

The new Stage 5 will offer grants on a property basis to individuals and businesses to procure their own Gbps capable broadband solutions from a selected range of suppliers.
Grants will be provided as follows:
To read more about the plans please download the full strategy, please click here. 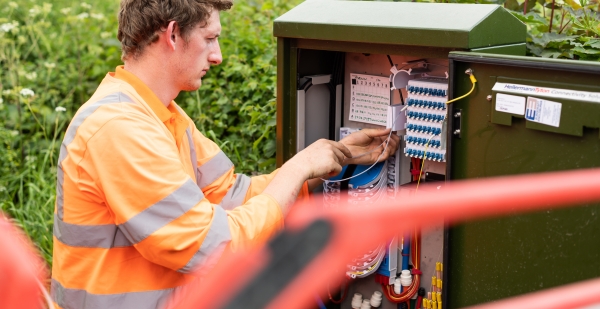 Fastershire and Gigaclear are hosting a community meeting to explain the rollout of ultrafast fibre broadband in network build area, Stone. 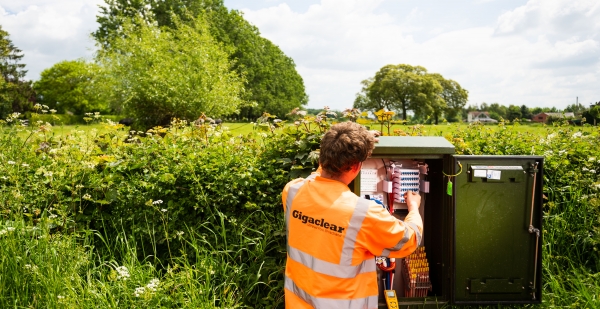 Fastershire and Gigaclear are hosting a community meeting to explain the rollout of ultrafast fibre broadband in network build areas, Stroat and Woodcroft. 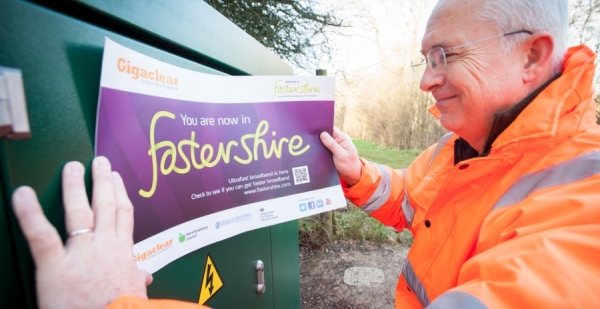 The £4.54m contract award will see over 2,600 of the hardest to reach homes and businesses in the area benefit from ultrafast broadband using a full fibre network delivered by Gigaclear.

The contract award made by Herefordshire Council and Gloucestershire County Council with financial support from BDUK means that premises will be able to access speeds of up to 1GB with fibre directly to the home.

The plan to deliver fibre to the home pre-empts the chancellor’s announcement last week to help at least two million UK homes and business get access to full fibre broadband.

Cllr Mark Hawthorne, leader of Gloucestershire County Council said, “Access to a fast and reliable digital connection is becoming more and more important for families and businesses here in Gloucestershire and right across the UK.

“We’re making a real difference to peoples’ lives, enabling the fibre network to reach some of the most rural areas where larger suppliers were not prepared to go. Faster broadband connection remain a priority to our economy, education and supporting our communities. The Fastershire project is pushing the boundaries of the technologies available with this next stage a key step in meeting the ambitions of the two counties.

“That’s why phase two of our Fastershire project focuses on using new and emerging technology to deliver full fibre solutions to some of the hardest to reach premises across the county.”

"Cllr David Harlow, cabinet member from Herefordshire Council added, “It’s positive that the Government has recognised the importance of "full-fibre" or fibre to the premise (FTTP) access and Fastershire has already made a significant investment in this technology.”

“It’s a measure of the project’s success that currently 15% of the properties in Herefordshire have access to full-fibre and is in stark contrast to the recent news that only 2% of properties across the UK can access the more future proof technology.”

“By making the recommendation to award the contract to Gigaclear to deliver phase two in parts of the Forest of Dean and the Golden Valley Fastershire will significantly increase the number of rural homes and businesses that can access ultrafast broadband.”

In June 2015 Gigaclear were also awarded a contract by Fastershire to deliver ultrafast broadband through their full fibre network to over 6,500 homes and businesses in the Cotswolds as part of a second phase rollout in the district. Delivery is well underway is this area with over 3900 premises now able to access ultrafast speeds. The rollout is expected to complete in summer 2017.

Phase two of the Fastershire project is building on the phase 1 rollout delivered by BT which has already enabled over 78,000 premises in Gloucestershire and over 37,000 in Herefordshire with access to faster broadband over 30Mbps.

A further contract to cover the rest of Gloucestershire and Herefordshire under phase two is expected to be announced early next year.

Updates on the phase 2 rollout of the Fastershire project can be found here.

Stage 5 of the Fastershire Broadband Strategy will focus on the final 2-4% of Gloucestershire and Herefordshire that remain outside of any formal plan to be upgraded to superfast broadband.

In anticipation of the launch of the Fastershire Community Grant Dynamic Purchasing System, which will be the main mechanism used to deliver Stage 5, Fastershire have published a State Aid Public Consultation.  This will determine which premises will be considered to be eligible for Stage 5 and it is important that any broadband infrastructure provider that has plans or an existing footprint in either county, verifies that the premises highlighted have not or will not achieve NGA capability through commercial means.

We have evaluated the information provided and can confirm that of the 29,430 Unique Property Reference Number (UPRN) that formed the basis of the consultation, 19,451 have been claimed as either covered or planned by one or more commercial providers and therefore will not be the target of our future investment.
A final total of 9,979 UPRNs will be eligible for our Stage 5 Fastershire Community Grant.

We're inviting Primary Schools across Herefordshire and Gloucestershire to take part in our filmmaking challenge to create a short film about internet.

Schools are required to produce a 30-60 second film to showcase positive use of the internet and can be an advert, comedy, documentary, ‘how to guide’ or news report.

The competition is designed to help demonstrates the benefits of the internet but also to provide an opportunities for children to use the internet as a learning tool, to search and accesses online resources to help them plan and produce their film.

The films will be uploaded to the Fastershire website and the film with the most views wins £200 for their school.

To take part in the FasterSchools filmmaking competition 2018, please complete the online registration form and return to info@fastershire.com.

To help you get started we've compiled some useful resources and 'how to' videos.

Into Film is an Education charity that offers support to teachers and educators to achieve a wide range of effective learning outcomes in their use of film.

Their website offers free resources about all elements of film making, by age and topic.

Young Film Academy helps over 7,500 young people each year complete their first films across the UK and is an official London delivery partner for the BFI Film Academy.

How to? Health and Safety

As young people now grow up using laptops, tablets and smartphones as if they were second nature, we would like to help them share their skills by teaching a family member how to use the internet.

Fastershire can run competitions with schools across Herefordshire and Gloucestershire to encourage students to teach a member of their family the basics of using the internet. At the end of the teaching, the student and the person being taught will be asked to write about the experience and what they've got out of it, and the student will submit this as an entry to the competition.

You can download PDFs of our training guides to use in training sessions or for your own learning...

The Government's Better Broadband Scheme aims to help provide access to a basic broadband service that will offer download speeds of at least 10 Mbps.

The Better Broadband Scheme, developed by the UK government, provides a voucher worth up to £350 for basic broadband installation to homes and businesses that will not benefit from superfast broadband.

The eligibility criteria for the scheme is as follows;